LULAC has denounced the national epidemic of hate speech and gun violence, which ultimately contributed to the tragedy in El Paso on Saturday, August 3. The mass shooting at a local Walmart, which killed 22 and injured 26, was the third deadliest shooting in Texas history, and the seventh deadliest in modern U.S. history. Including this latest tragedy, four out of the ten deadliest mass shooting in modern U.S. history have taken place within the state of Texas.

** PRESS CONFERENCE WILL BE LIVESTREAMED ON FACEBOOK AT @ADELANTECONDOMINGO **

WHAT: Press Conference by LULAC leadership to call upon Governor Abbot to pass stricter gun regulations, put an end to hateful rhetoric leading to violence in Texas

** PRESS CONFERENCE WILL BE LIVESTREAMED ON FACEBOOK AT @ADELANTECONDOMINGO **

Get detailed directions and more on Google Maps 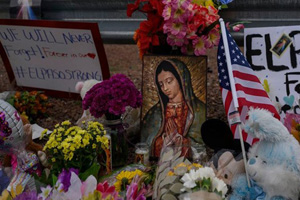