he League of United Latin American Citizens (LULAC) in McHenry County will hold a “Freedom Walks for Justice” rally and march on Woodstock Square on Saturday November 2 beginning at 1 pm. LULAC members, friends, and supporters will walk as a group for one mile on the sidewalks around the Square with one message: “We walk, Mobilize, and Vote.”

The program will begin with a rally around the Gazebo on the Square at 1 pm featuring Latino voices for political empowerment and civic participation at a time Brown communities are under stress and attack. Voter registration and political involvement will be stressed.

The local event is just many marches across the U.S. that began in Washington, D.C. on October 3 and will conclude in the same city on November 3. Altogether there were 15 major marches in cities with large immigrant and Latino populations including six in Texas; New Orleans, Louisiana; Jackson, Mississippi; Birmingham and Montgomery, Alabama; Atlanta, Georgia; Charlotte, North Carolina; and Charlottesville, Virginia with scores of local marches like the one in Woodstock. 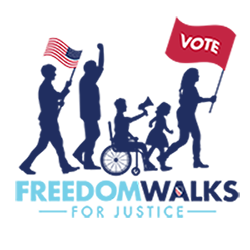